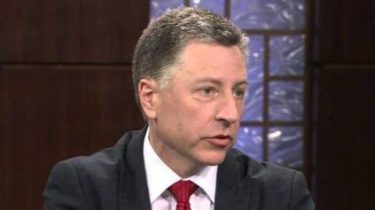 US special envoy on Ukraine Kurt Volker said that the implementation of the Minsk agreements need to out of Donbass was the withdrawal of the Russian troops.

About this, Walker said in an interview with the Russian TV channel “Rain”.

“We need to clearly understand that in the Donbas are Russian troops in the Donetsk and Lugansk regions. There are military vehicles and equipment. The problem is that the presence of military equipment creates conflict,” he said.

Walker noted that, according to the official reports of the OSCE, most of the violations of the cease-fire comes from the Russian side.

“Russia’s interest destabilizie the situation. We need to create the conditions for a real cease-fire…”, – said the representative of the United States.

Kurt Volker also said that Russia itself acknowledges that according to the Minsk agreements, the occupied territory of Donbass should be returned to Ukraine.

“In order for that to happen, you need to withdraw Russian troops and to keep people safe, so they can feel confident,” he said.

The special representative of the United States noted that after it is secured in the Donbass, then can go to a political process that will allow you to achieve a special status in the region and will provide an opportunity to hold elections there.