In the industrial area Avdeevki soldiers under fire, was watching the parade from Kiev 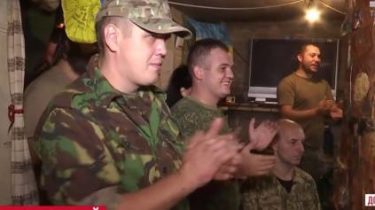 At the forefront of the Independence Day has not passed without attacks, but the military did not miss the chance to see the parade in Kiev on television. The positions of the 72nd brigade under the plant for this was a special occasion – the awarding of their fighting fellow star of the Hero of Ukraine, says the story TSN.19:30.

The militants did not give up attempts to lure the Ukrainian military in a shoot – provoked with small arms and rocket-propelled grenades. “Their snipers drove out there to see where we work. And their snipers start at us very precisely to work,” explains the fighter with the Callsign “the beekeeper”. Ukrainian soldiers in such hostile activity almost do not react, but are in their positions and to retreat with them do not plan. “I don’t regret going, I’ll be honest. I went to my nephews – I don’t want them hiding in the cellars”, – said Dmitry, who for the third year in a row celebrating a birthday at the front.

This persistence and sacrifice has a high price – only for the last partial year during fighting near the town killed fifty soldiers of the 72nd brigade. In the past tiga fatal injuries suffered Sergei Pen – he came out of the dugout just to call when the projectile landed a grenade launcher and exploded very near the Ukrainian warrior. Around their position – literally, scorched earth. But the defenders of the Town care about a holiday no military difficulties, and the awarding of a fellow, the company commander Vasily Tarasyuk – the time to live from Kiev, they met with applause. In addition, the team received the honorary title: “Black Cossacks”.