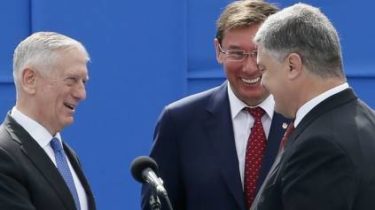 The President of Ukraine Petro Poroshenko has discussed with U.S. Secretary of defense James Mattis the question of increasing the defence capabilities of Ukraine. The head of state said after a meeting with the American Minister, UNIAN reports.

“We do, in the time of my visit (in the USA), agreed that we have a very active dialogue on ensuring defence capacity of Ukraine. It concerns not only the supply of lethal weapons but also security and increase defensive capabilities (Armed forces of Ukraine), including electronic warfare tools that increase the effectiveness of our Armed forces in the defense sector,” – said the head of state.

However, the details of the negotiations, the head of state said no, but indicated that the conversation was fruitful.

“Discussion of these issues before making a final decision requires silence, today I would not like to comment on these issues, but I can say that the discussions in our discussion of I, as President of Ukraine, satisfied,” – said Poroshenko.

The visit of U.S. Secretary of defense James Metts extremely important for Ukraine and for our common fight for the values of the Free World. During the negotiations with James Mattis we’ve discussed the issues of counteraction of aggression of Russia against Ukraine. This is a key issue and our common challenge. And most importantly – we coordinated our approaches as to how to proceed to restore the territorial integrity and sovereignty of Ukraine. I am grateful to Mr Metta for the timely visit and a strong willingness to further develop our cooperation.

Published by Petro Poroshenko on August 24, 2017

In turn, Mattis said that the US is actively considering the issue of granting Ukraine defensive weapons.

“Defensive weapons is not a geeky tool, if you are the aggressor,” – said the head of the defence Department of the USA. However, he called for the preservation of confidentiality with regard to negotiations with Poroshenko in this matter.

We will remind, the day before in Kiev there has arrived the Minister of defence of the USA James Mattis, he had to discuss with the Ukrainian authorities, in particular, the provision of lethal weapons. The state Department notedthat the decision is still pending. Before the meeting in the presidential Administration Mattis took part in the parade devoted to independence Day of Ukraine and received a positive experience from the event.