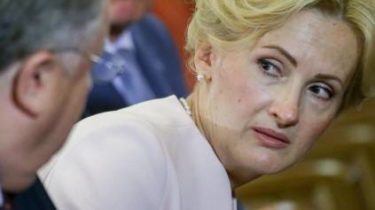 Ukraine has lost sovereignty and independence. To such conclusion came the “Deputy speaker” illegitimate “state Duma of Russia Irina Yarovaya at the end of the military parade on Independence Day on Khreschatyk street in Kiev.

“It seems that the March of NATO symbolizes their contribution to the operation “Maidan” anti-constitutional coup in Ukraine… All events illustrates the already crowded chronicle of events of the loss of Ukraine’s sovereignty and become a territory of external control”, – commented on the celebration of Spring. In her opinion, the intervention of the Alliance began much earlier, the signs of which became “the seeds of Russophobia, ignorance and disrespect to the General history of their ancestors, ignorance and nationalism.”

Videofunny parade on the independence Day of Ukraine

“The Donbass is not subjected to such policy of self-destruction. The question is, whether the converted front marches in aggressive everyday life, unfortunately, is rhetorical”, – said Russian politician.

As reported, Ukraine on 24 August, a military parade was held, in which participated soldiers of the countries-friends of NATO – Britain, Canada, USA, Poland, Baltic States and others. The celebration was visited by the Ministers of defence in many of these countries, in particular the head of the Pentagon James Mattis.