The explosion on Hrushevsky: the chief of police Knyazev announced new details of the crime 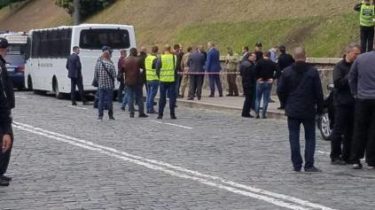 Victims of the explosion on Hrushevsky on Independence Day were members of the same family. This was stated by the head of the National police of Ukraine Sergey Knyazev, UNIAN reports.

According to him, around 14:00 hours, unknown attackers threw an explosive device from the territory of the Mariinsky Park to the family, who walked the streets of the city. “Fortunately, it’s not a bomb fell on the pavement and exploded nearby, it reached a few meters, but three people are now hospitalized. Was the family that was just walking,” – said Knyazev. The injured was given first aid by passers-by – the captain of the guard and Lieutenant of the APU, which took place nearby. Then the wounded people were transferred to the paramedics.