Unprecedented parade and children on armored machinery: Kiev was done on 26-th anniversary of independence of Ukraine 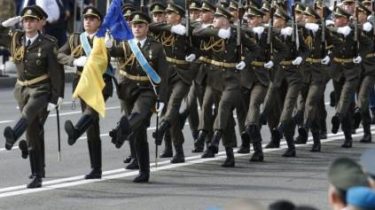 The parade, which Ukraine has not yet seen, took place in Kiev. on Khreshchatyk were soldiers of Armed forces of great Britain, Georgia, Estonia, Canada, Latvia, Lithuania, Moldova, Poland, Romania and the United States of America, according to a story TSN.19:30.

The event was accompanied by unprecedented security measures. “Checked everything possible to check and everything can be a potential danger,” – said the head of the Department of state protection Valery geletey. The national anthem of Ukraine at the celebrations was singing not only the chorus, and the whole ” singing not only the chorus – the whole mass Maidan. It reminded of soldiers who gave their lives three years ago stopped the enemy on the East of the country. “With extreme pain in these days we remember the heroes of Ilovaisk. They treacherously attacked units of the Russian regular army who have invaded our land without declaring war, as Hitler. Eternal memory to the soldiers who perished in the battle for a free and independent Ukraine. Eternal glory to them”, – said the President Poroshenko.

Videomary security and foreign guests in Kiev, the Independence Day was celebrated by a massive parade

On the Maidan took place also the presentation of the battle flags. Now the 24-th mechanized brigade will be named after King Danylo Galician, 72-ha will be the name of the Black Cossacks. Ukraine became the heroes of Vasily Tarasyuk and Eugene Flap (posthumously). The parade went 4.5 thousand Ukrainian soldiers and hundreds of military personnel to neighbouring countries and countries-members of NATO. The defence Ministers of these countries stood on the podium together with the leadership of our state, the audience, the passage of foreign military greeted warmly, but most of the applause goes traditionally at “box”, which consisted of veterans of the ATO. “These measures are needed so that the people were United and he felt that he was not alone,” say the people of Kiev.