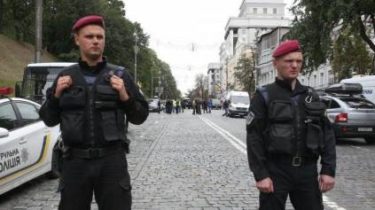 An attempt to spoil the party in Kiev called the explosion on the street Grushevskogo. According to preliminary data, there are unknown persons threw a flash-Bang grenade, resulting in injuring three passers-by, says the story TSN.19:30.

It happened a few hundred meters from downtown, where they had the main celebration of Independence Day. Witnesses say that did not at first understand what had happened. “We saw that under the parapet is a woman, she was wearing coloured clothes. And who she still was. They were wounded by shrapnel in the head. Why in the head because a grenade was thrown above the parapet. We saw a large spot burned a spot,” – said an eyewitness Yuri Yasenchuk.

Videotaped the attack: on Hrushevsky street, an unknown person threw a grenade

On their own journalists, injured no threat. “Injuries were received by two people – a man and a woman. Subsequently, from the hospital we received another message about the hospitalization of one woman. The experts carefully examine the scene to gather evidence and establish what explosive device was used”, – said the press-Secretary of police Oksana Blischik.