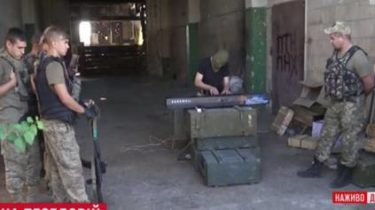 “School fire”, which agreed in Minsk, lasted on the front for exactly 120 seconds. Two minutes after the announced start time , the militants used machine guns on the Ukrainian positions in the ATO zone, says the story TSN.19:30.

About an hour lasted the fight in the direction of Mariupol, which killed a Ukrainian soldier. In General, during the day, but him injuring three soldiers.

Gunfire continued near the Town, but there the enemy had not used heavy weapons. Machine gun same queue subsided at dawn, and day of the day was relatively quiet. The men were able to enjoy an unexpected gift – on the occasion of Independence Day them to the forefront of came known since the time of the Maidan pianist. Man in Balaclava brought the synth, and just in the middle of the wrecked hangars of the industrial area played music for defenders of Ukraine from the occupier.