Will the mothers of the fallen soldiers and bowed his knees on the Maidan: “March of the undefeated” ended with a prayer 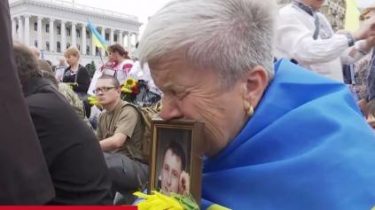 In Kiev, relatives, friends and brothers-in-arms of those who defended or now protects the Ukraine, vlachovo at the conclusion of the military parade “March of the undefeated” on Khreshchatyk. On the faces of these people was not a festive mood, but in the hands they held photos of those who gave their lives in battle, were missing or were captured by the enemy, says the story TSN.19:30.

“For the third year already, we never forget them. We have a lot of missing guys still Ilovaysk”, – say the demonstrators. They admit that for them, the festival now has a bitter taste, because thousands of patriots day war for independence and shed for her his blood.

Videoroliki, friends and comrades of the Ukrainian defenders staged in Kiev “March of the undefeated”

“Gait unconquered” the ordinary people of Kiev and guests of the celebrations were touched by the people was met with applause. Many eyes were dimmed with tears, and in the center of Kiev sounded voices: “glory to the Heroes!” and “Ukraine above all!”. On Independence square column came under the slogans of the revolution of Dignity: “Heroes do not die!”. The most difficult moment of the March – the song “Flowing quality”. During her men kneel and women do not hold back tears. “My son died in this war. It is a great sorrow that will be with us until the end of life. I’m asking people to be remembered about them. Until they remember they are alive,” – said the mother.