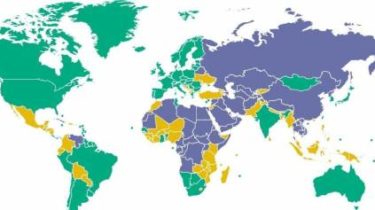 One of the most famous human rights organization Freedom House on the map-the rating of the dual threats of democracy in the world from the side of the populists and autocrats singled out Crimea the same color, and Russia.

The indignation about this situation was expressed by the Deputy from BPP Vladimir Aryev on his page on Facebook.

“The special cynicism of the situation adds the title of the report – “Dual-threats to global democracy.” This is not the first time Freedom House indulges the Russian invaders”, – said in a statement.

I have no words. One of the most famous human rights organization Freedom House on the map attached Crimea to Russia. Special…

“Last year, I noticed such a shame as the map in the English Cathedral in Salisbury. Then cynicism added the location of the monitor with the “Russian” Crimea in three metres from the original Magna Card – the first European bill of rights. In the Cathedral I wrote a complaint, but someone in Freedom House continues to insist that they, unfortunately, justify this flagrant violation of international law,” wrote Ryan.

Later, the Aryans added that Freedom House evaluates threats to democracy in the countries and territories.

“OK, but then it turns out that the occupied Donbass “partly free” because it is not a separate territory that is not controlled by the Ukrainian government. So, excuse not accepted – the principles violated under any circumstances,” he added.

We will remind, in 2016, Freedom House acknowledged Russian elections in the occupied Crimea illegal.