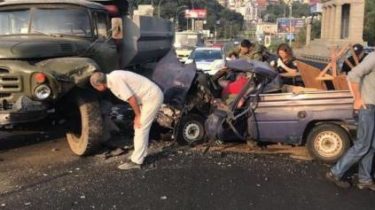 In Kiev on the bridge Paton, occurred a serious traffic accident involving a military truck and a Vase.

“According to preliminary data, the driver of VAZ lost control and flew into oncoming traffic, which at the time was driving ZIL”, – stated in the message.

In the accident suffered the driver of VAZ, he got pinned in the car, so got man squad. After that he was urgently hospitalized.

Serious accidents with victims on the bridge Paton! According to preliminary data, the driver of car #VAZ, lost control…