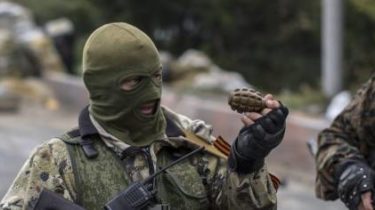 In the Donbass after the introduction of the “school” of the truce, despite the constant presence of the commissions of the Russian command, in units of fighters dramatically increased the number of cases of alcohol abuse and illegal acts against the population.

“In the village of Sentyanovka (renamed Frunze village – approx.ed.) a group of soldiers 4 separate motorized rifle brigade (Alchevsk) 2 AK in the state of alcoholic intoxication was done indiscriminately and exploding grenades,” – said in the message.

Fire fighters from grenade launchers in the industrial area of Avdiivka and shelling near the Water. Digest ATO

Besides, near the village Nameless drunken soldiers 9 private infantry assault Marines (Novoazovsk) 1 AK I made road accident in which result was injured two civilians.

According to scouts, is the behavior of mercenaries causes outrage the local population and provoke open opposition.

“The inhabitants of one of settlements of the Slavyanoserbsky region of the disarmed soldiers three 4 separate motorized rifle brigade, who, being in a condition of strong alcoholic intoxication, threatened the use of weapons,” – said Ukrainian military.

Earlier, in the occupied Donetsk, the Russian military has beaten a local resident. Mercenaries with guns robbed beaten a package of store-bought goods and fled.