Russian actor Pashinin fighting against Russia in the Donbass, and only regrets about lost love 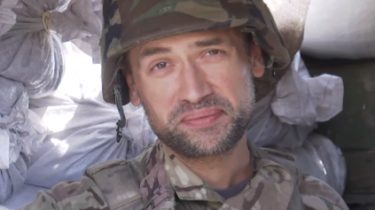 The hero of the cult TV series “Storm gate” Anatoly Pashinin for more than a month of fighting in the eighth battalion “of the Ukrainian volunteer army.”

His movie image of the heroic Russian military became a weapon in the hands of the Kremlin propaganda, but now he took up arms to defend his native Ukraine. This is stated in the story TSN.Week.

In the pocket of his spotted outfit he wears a faded passport with double-headed eagle, but its roots are and his family in Ukraine. Already the fighter of a battalion “Aratta” had to be held in the Russian trenches many days. However, the days were filming, and the cinematic trenches. Four years ago, the Russian actor Anatoly Pashinin, star of TV series “Storm gate”, and did not suspect that he would return to defend the land of their ancestors, where the trenches, and bullets, and death is not cinematic.

Russian television a few times a year turns the “thunder gate”. The main character, Lieutenant Doronin, a Russian officer, convinced millions of Russians that die for the Kremlin – it is honorable and beautiful. After the Euromaidan, the idol of the Russian audience left in Moscow a prestigious job, apartment in the center, influential friends and a Bohemian way of life and returned to Ukraine.

Anatoly Pashinin: “First helped with money, and then when the money ran out, what else can help? No money and earn anywhere. Only come to dig, to shoot and “eyes” to stand”.

So Anatoly Pashinin became a soldier of “Ukrainian Volunteer Army.” “This is the status (shows badge). Eighth separate battalion of “Aratta”. This is the status. His car can not buy”, – says the former actor.

Yes, perhaps there is another reason why the idol of the Russian officer caste is fighting against Russian mercenaries and family. Pashinin: “Call “Backup”. By the way, I took my brother. He also fought under the call sign “Double”. And since we have the same set of chromosomes, I thought, and call me too”.

The elder brother of the actor, Konstantin – an officer of the Armed Forces of Ukraine. He fought at Donetsk airport in the most difficult days of the conflict. Now the star of the fighter, but brother, there are still a battalion brethren.

The eighth battalion holds one of the most dangerous sections of the front. He Pashinin before the war for the support of the Maidan and anti-Putin stance has become the enemy of the Kremlin. Although the actor and is still offered roles in the film – no turning back. “Love. That’s what was hard to refuse. They say she is among the ten most beautiful women. From money to withdraw easy. But from the love of a beautiful woman is difficult,” – said the fighter.

His convincing acting in “Storm the gates” and further directs the consciousness of the Russians of the Kremlin in the right direction. He is confident his star Duo with Mikhail Porechenkov was part of the propaganda plan.
It is likely that this plan really was. It finally explains why the infamous Porechenkov, putting on a blue journalistic signs, came to shoot at Ukrainian soldiers under the video. “I wanted to be at arm’s length with that dwarf to fucking push him in the eyes as much as in the skull. I mean Putin. And Porechenkov is a machine. Just didn’t have a chance and opportunity to meet him. This is the only thing that stops from being able to break out curses at him. So I have hope. Who knows, maybe that Porechenkov and end this war. Still think the bastard Porechenkov. And he would stick the pencil so the dog. Let him only to reach out to Putin, and everything” – does not exclude Pashinin.

Anatoly commanders realized they got the weapons, much more powerful than a machine gun. Andrew Gergert, the commander of the 8th battalion “UDA”: “He is a very powerful unit in our war against Russia.”

Alex Manchinsky, the commander of a platoon strong point: “the Fact that Pashinin was a sample of the Russian soldier, the icon, was built on what the Russian army and propaganda, this man came to defend Ukraine, and this suggests that in this situation Ukraine law”.

And a movie star in his command is far-reaching plans. Better than any blockbuster. Andrew Gergert, the commander of the 8th battalion “UDA”: “I was making it so special. He is a man of great endurance. It may be symbolic, if he captured any Russian soldier. We will think how to organize it”.