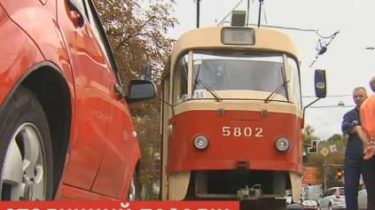 After lunch, a grief-the driver of a red Chevrolet parked in the lane reserved for public transport. After half an hour the street Borisoglebskaya stopped. Two hours later, the woman came to the place, declined to comment.

“She said that it is not local and didn’t know where to Park”, – says the explanation of the driver policeman.

Law enforcement officers and drivers say such a situation on this route occur almost daily. The maximum penalty which threatens violators of 510 hryvnias.