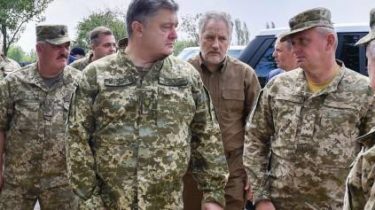 The President of Ukraine Petro Poroshenko welcomed the leaders of Germany and France called for a full truce in the East of Ukraine in connection with the beginning of the school year. The Ukrainian leader believes that the recruitment is primarily of Russian President Vladimir Putin as the aggressor and the parties to the conflict.

About this Poroshenko wrote on his page in Facebook.

The President of Ukraine noted that for its part, has charged the leadership of the Armed forces of Ukraine continue to adhere to the declared mode of silence. This topic in particular was discussed during the meeting Poroshenko with the military leadership in Kramatorsk.

“The ceasefire on the occasion of the beginning of the school year must purchase comprehensive, creating favorable conditions for advancing the peace process with the aim of restoring sovereignty and territorial integrity of Ukraine”, – said Poroshenko.

Poroshenko on Donbass arrange a meeting with the military

Recall, the leaders of Germany and France Angela Merkel and Emmanuel macron called on the presidents of Russia and Ukraine to provide “school truce” in the Donbass.