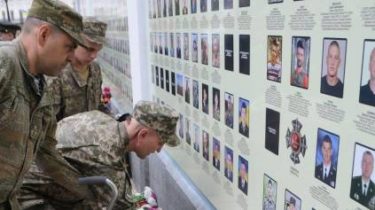 In Kiev, near St. Michael’s monastery sent today, the memorial prayer for the victims of the tragedy Ilovaiskaya. Traditionally, only came the families of the victims, their colleagues and the military, who managed to get out of the boiler, joined officials. Relatives for the third year in a row, demanding that they met the country’s top leadership. And they need to punish those responsible for this tragedy.

Eternal memory of the fallen soldiers funeral, the monks of St. Michael’s. Women hold portraits of the dead sons and husbands.

In the courtyard of the monastery, meanwhile the parents of dead soldiers were binding sheaves of wilted sunflowers – Ilovaysk, Green, Oleksandrivka, Agronomic – this village, among which was the so-called “green corridor”. The Russian military initially promised a safe exit from the boiler is surrounded Ukrainian soldiers, and when they went, shot them in the dash.

Sunflowers – 366, so many soldiers died in Ilovaisk. The protesters want the memory to 29 August, when the Armed forces of Ukraine suffered the largest in the history of the loss was memorial Day.

The students in the monastery led today Petr Potekhin. Colonel three years ago fought at the Tomb of Saur, August 20, I received a second wound. It even had to be evacuated. All his comrades were in ilovaiskaya boiler.

“The soldiers who came with me, later died in Ilovaisk. Who died, all of them were captured. And captured it by the Russian troops,” – says Petr Potekhin.

Ilovaysk was a turning point in the war, says Potekhin. After the liberation of this town Ukrainian troops have surrounded Donetsk. Would be cut off separatists from supplies, would break their grouping into several parts. But the Armed forces of Ukraine received the treacherous blow from the Russian troops.

General Prosecutor’s office in its investigation of the events of August 2014, the results of which are referred to the international court in the Hague, came to the conclusion that a large-scale invasion of the Russians broken the military situation, not on the side of Ukraine. After Ilovaysk, the Ukrainian army went on the defensive, and after a few days came the Minsk agreement.