Flight over the “nest” of Yanukovych, TSN showed from the air likely the estate Yanukovych in Moscow 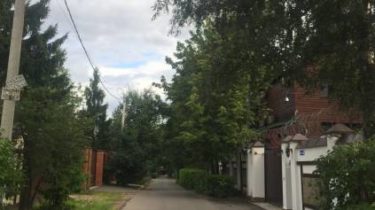 After Joseph Kobzon on the door to Viktor Yanukovych in the suburban village, the journalists decided to visit this place and learn something about the Ukrainian fugitive. The road to Bakovci by car took only 20 minutes, says the story TSN.19:30.

Elite settlement is located near the Minsk highway, was formerly dotted with dachas of the Soviet marshals. Exactly where Yanukovych lives – Kobzon speaks, however, confirms in conversation that the former politician and really is his roommate. To clarify, did Kobzon Yanukovych personally in Bakovka, Russian says no and does not want to see.

Videofilter Yanukovych resides near Moscow next to Joseph Kobzon

Love Yanukovych to high fences known since his stay in Ukraine, and it seems that in Russia old habits have not disappeared. Real place of residence of the fugitive carefully hidden – the official version is that he lives in Rostov-on-don. Here is his correspondence with the Ukrainian investigators on the case of treason, however, personally in Rostov Yanukovych out of court and no one saw.

“No comment”. Lawyer Yanukovych fled from questions about the cause of the rejection

Lawyer Yanukovych Vitaliy Serdyuk suspicions Kobzon commented with a smile. “I completely refute the information they are declared. I demonstrate the official response documents – the certificate of temporary asylum on the territory of the Russian Federation. In the application, which is usually the address of registration”, – said the lawyer.