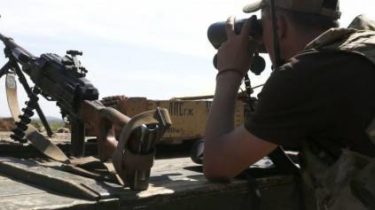 On the map of Donetsk and Lugansk regions in the area of ATO remains only a few points where the retained voltage and the enemy continues provocative attacks.

First of all, is the industrial area of Avdiivka. Here from midnight the militants four times opened fire from grenade launchers, heavy machine guns and small arms. And about 14 hours of shooting criminals released 2 mines of calibre of 82 mm at one of the Ukrainian strongholds. Also today, Russian mercenaries several times opened fire from small arms near the mine Butovka.

On the Mariupol direction there is only one provocative attack. About 13 hours the enemy fired 4 mines of calibre of 82 millimetres and hit from a grenade launcher on the outskirts of Marinka. On Lugansk the direction completely remained silent mode.

“Comparing the amount of firing enemy provocations over the past few days with the beginning of the month, it can be concluded that the dynamics of the decrease of attacks during the new phase of the truce positive”, – stated in the message. Also the command of the Ukrainian units on the boundary line is doing everything to make it impossible for active fire opposition.

#Topod the Construction of the press center of the ATO headquarters as of 18: 00 August 30, 2017 On the map of Donetsk and Luhansk regions in …

Published by the Press center of staff ATO 30 Aug 2017

“We are ready for peaceful dialogue. At the same time, in the case of aggravation of the situation, the Armed Forces of Ukraine have enough forces and resources to adequately respond to the enemy in case of an offensive and aggressive attacks on our positions”, – summed up the Ukrainian military.

Videosa open fire in the ATO Ukrainian military can prosecute