In South Africa, the hippos came to the aid of the antelope, attacked by a crocodile 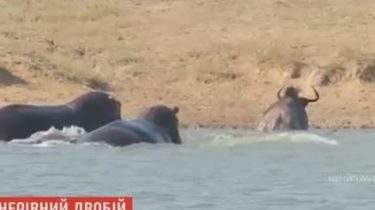 Assistance, where it was impossible to hope for. In South Africa the Hippo saved the antelope from a crocodile. How it took 72-year-old local pensioner, who came with his wife for a walk.

The crocodile grabbed the antelope in the hoof and tried to pull into the lake. The animal escaped as best they could. In the eighth minute of the battle for life is already lost strength and was ready to give up, when suddenly came to the aid of hippos. They drove away the predator. But at the same time and showed the crocodile, who’s on the lake owner.

Antelope, cut up the leg, ran to his herd.