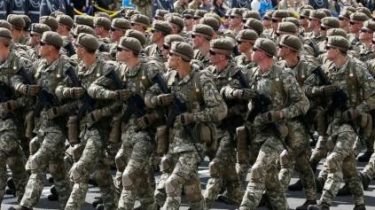 Ukrainian servicemen will earn salaries under the new arrangements.

The corresponding project of the Ministry of defence at its meeting today, August 30, supported by the government.

“This is a revolutionary decision and would like to thank everyone who worked on it. The order of calculation of military pay has not changed since the days of the Soviet Union. The basis of the salaries included salaries according to military rank and position. What is proposed today will significantly increase protection and social justice. We are moving away from how it was when 10-15% of the software is that is retiring, and then – 17 allowances, which are opaque and inefficient,” said defense Minister Stepan Poltorak.

“Now is the formation of the draft budget for 2018. We work with the President, the national security Council, from the point of view of forming the necessary resources to support defense,” – said the Prime Minister-the Minister Vladimir Groysman.

Subsequently revised and the law on pension security of servicemen.

“Immediately after the adoption of a General pension reform next step is new legislation on provision of pensions to servicemen. It is also our priority,” – said Groisman.

Earlier NSDC Secretary Oleksandr Turchynov said that the military salary may not be less than those civil servants in comfortable offices.