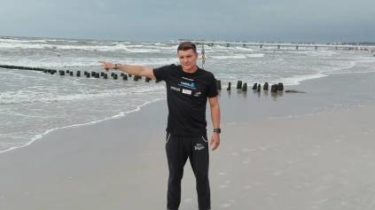 Therefore, the swimmer set a world record, because nobody did in the world. The athlete started from the beach of the Polish city of Kolobrzeg on Monday at 20:09pm (Kyiv time), and completed the swim on the Danish island of Bornholm on Wednesday at twelve-thirty at night.

Almost 100 kilometres Sebastian managed to do it in 28 hours and 30 minutes.

Swimmer all the time accompanied the boat with a rescue team, which is hourly with a stick gave him food. Relax on the boat, the athlete could not. After the race the champion complained only at the low temperature of the water in the sea.

Karachi managed to conquer the Baltic sea only at the second attempt. Preliminary swim from Kolobrzeg to Bornholm in August 2016 ended at the distance of 30 km due to large waves and sea-sickness. 2015 athlete has crossed the English channel with a national record (8 hours and 48 minutes).

Recall that the Ukrainian singer Ruslana has established its own record. Star for half an hour crossed the “lake of youth” in Bukovel at a temperature of 13 degrees.