In Kiev, Toyota and Chevrolet do not share the road, there are victims 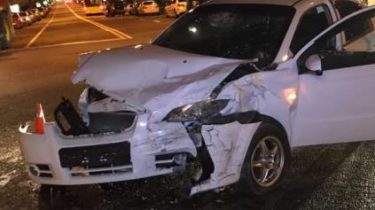 In Kiev there was an accident victims at the intersection of Taras Shevchenko Boulevard and street Simon Petlyura.

The road is not shared Toyota and Chevrolet.

Of road accident victims at the intersection of Taras Shevchenko Boulevard and street Simon Petlyura! The road is not shared cars…

Suffered the driver and passenger of the Chevrolet, the last hospitalized.

We will remind, in the Donetsk region the truck flew into the bus, there are victims. The accident occurred on August 28 at Liberty street.

According to the report, the accident occurred involving bus No. 14A and trucks.

As a result of collision has suffered, which was already hospitalized.

While their number is not specified.