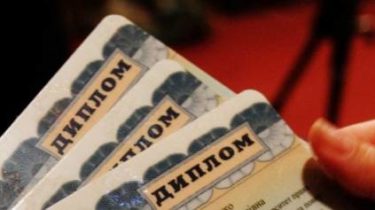 In capital Prosecutor’s office said that the Chief of staff of the Kyiv city state administration reported about suspicion in use of counterfeit document and assist in its manufacture.

About it reports a press-service of capital Prosecutor’s office.

It is noted that we are talking about the diploma of Lviv national University. I. Franko.

“The actions of officers while suspended from duty, is qualified under part 4 of article 358 and part 5 article 27, part 1 St. 358 criminal code of Ukraine. After handing the suspect the person questioned as a suspect, but from testimony refused, citing the provisions of article 63 of the Constitution of Ukraine. Now pre-judicial investigation proceeds “, – noted in Department.

Earlier it was reported that the Deputy of the mayor of Kyiv, head of Kyiv city state administration Volodymyr Bondarenko, probably has a fake diploma on higher education. This was discussed in the investigation of journalists of the program “Schemes”. Bondarenko was a janitor at the Kyiv school, and then became assistant to the Deputy of city Council Vitaly Klitschko, 2013 – assistant Deputy. When Klitschko was elected mayor of the capital, Bondarenko without competition and special checks secured a position in KCSA.