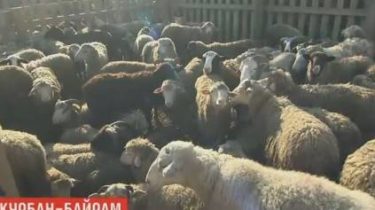 The first of September in the mosque. Muslims around the world celebrate today one of its main holidays: Eid al-Adha or day of sacrifice. Around the world millions of Muslims are United in prayer. In particular, in the main mosque of Kiev, says TSN.12.00.

Eid al-Adha – the biggest festival for Muslims all over the world. In Ukraine, the main celebrations are traditionally held in the largest mosque of Kiev – Ar Rahma.

Sunrise here began a joint prayer of believers. And very interesting observation, it doesn’t matter who you are – a diplomat, a politician or an ordinary worker. All brothers. All are equal. And this prayer on the feast of the sacrifice should unite.

The inherent attributes of the holiday – white or special clothing that symbolizes purity. Well, sheep. Them, at least in this mosque, the journalists of TSN counted three dozen. Traditions unchanged, so no sacrifice, no cost. It’s like a tribute to God. However, as they say themselves Muslims, the ritual performed so that the maximum animal felt no pain. It is worth noting that it’s a secret procedure. Therefore the sacrifice can see, not all but only the result, as were treated to all comers. It is also an essential holiday tradition.

The way of celebrating, too, has its traditions. Without unnecessary extremes and fun. More prayer and fellowship. Eid al-Adha will be celebrated traditionally at least two days.