First lesson – help the wounded: in the frontal Marinka opened the door and immediately the two schools 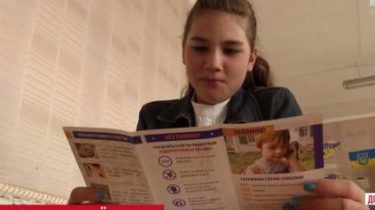 Children on the frontline went to school under heavy military guard, and eight schools did not open because of the destruction. Training returned to Marinka, says the story TSN.19:30.

Janitor Vladimir and Sergei, the only technician who is present in Krasnogorovka school on September 1. In the summer of 2015 the building was hit by the first shell, and the kids there never returned. The last entry on the Board as dated 2015, then school was just shot from a tank. “Perfect chemistry was. He is the projectile flew. Landing – this is a “DNR-ovsky” territory, apparently, from Donetsk fired”, – eyewitnesses speak.

Videogame at the forefront went to school under heavy military guard

This is not the only school in the ATO zone, where children do not sit behind their desks. Such institutions need to rebuild from scratch, so the students transferred to nearby schools, where to learn in two shifts. In the next Marinka, despite the damage, the academic year in schools began with Patriotic symbols – flags, ribbons and embroideries. Serenity holidays was guarded by military and law enforcement officers, because the day before there were rumors about possible provocations. Eyes from the holiday lineup is not averted and OSCE observers.

The school Windows are closed bags, and the classes begin with a lesson in safety – rules of first aid. The basic principles of survival the children know already and without manuals. “We have done three calls, and we peacefully, without panic, go to our bomb shelter,” – said the school psychologist Valentina Linnik. This room is always open and has a supply of fresh water, but the military said that compared to last year the situation at the front became quieter. Although I know from experience that the truce longer than a week usually is not aged.

Yesterday it was reported that the Alexander school in the Slavic region of Donetsk will not open on 1 September. The supporting institution of education, calculated from seven villages, still not repaired properly.