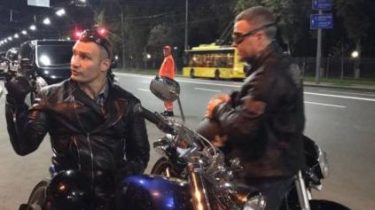 The mayor of Kiev Vitaly Klitschko and the head of Kyivavtodor Alexander Thickened inspected the condition of new roads in the capital.

While officials were on motorcycles – the respective photo Klitschko announced on his page in Facebook.

Among the roads that were inspected Klitschko and Thickened, was Povitroflotskyi Avenue.

Klitschko with the head of Kyivavtodor on motorcycles inspected the new roads of Kiev:) in Particular, Povitroflotskyi Avenue.

Published by Oksana Zinoviev on 1 September 2017.

In comments to the post users are advised the mayor on what streets he, too, is to ride, as well as interested in that tuple is in the background. In addition, many users note the similarity Klitschko with Terminator.

Video settings in Kiev will repair 300 miles of roads