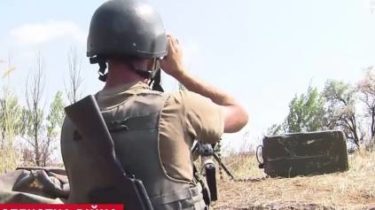 For the past day in the zone ATO Ukrainian military killed there, but was injured one soldier.

This was said at the briefing the speaker of the Ministry of defense of Ukraine on ATO Col.

“In days that passed, the fighting none of Ukrainian military died. But one Ukrainian soldier got lightly wounded”, – he said.

Motuzyanik said that it happened near Zaytsevy a result of enemy fire from light weapons.

He also reported that at the direction of Lugansk on Saturday, the militants opened fire 1 time per area of Novozvanovka. It was used rocket-propelled grenades.

In the direction of Donetsk were 15 attacks with small arms and rocket-propelled grenades.

On the Mariupol direction, there have been 10 armed provocations of the enemy.

Heavy weapons fighters on Saturday was not used.

As you know, earlier the headquarters of the ATO reported that for the past day militants opened fire 26 times, losses among the Ukrainian military no.