Lutsenko told about dozens of MPs, which can remove the immunity 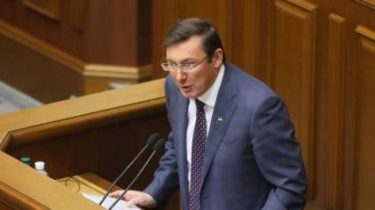 The Prosecutor General of Ukraine Yuriy Lutsenko said that in autumn it is possible to make new submissions to the Verkhovna Rada on removal of inviolability from deputies.

About this Lutsenko said this during his working trip to Nikolaev, reports UNIAN.

According to the public Prosecutor, now a few dozen parliamentarians are checked for correctness of filling of electronic declarations and full payment of taxes.

“Today, half a dozen of them are under the tax notices-decisions is the notification tax that taxes paid not all. They have the right to appeal in the courts. Only after the court recognizes that taxes paid is not all, I go to the Verkhovna Rada”, – said Lutsenko.

158 deputies introduced a bill in Parliament to abolish the immunity

The head of the GPU noted that there are other members who are outside the tax suspicion, but considering the result in other cases. When evidence is collected fairly, Lutsenko will give representation in the Verkhovna Rada.

The attorney General refused to name the MPs, which can remove the immunity.

“According to my subjective feelings, the fall will have to submit new ideas. How much? Don’t know if you knew, you still wouldn’t say. Who is the more”, – said the Prosecutor General.

Recall, 11 July, the Verkhovna Rada at its evening session considered the submission of the Prosecutor General of Ukraine regarding the removal of immunity of five deputies , Yevgeny Deydey, Oles Dovgy, Andrey Lozovoy, Maxim Polyakov and Borislav Rosenblatt. By results of voting integrity was removed from Dovgy, Polyakov and Rosenblatt. However, the deputies did not support the removal of immunity from the Dade and Lozovoy. In addition, immunity was removed from Mikhail Dobkin.