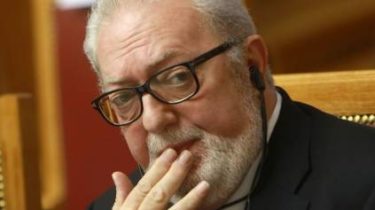 Pedro Agramunt filed in the Arbitration Committee of the Council of Europe on the illegality of the PACE resolution, which opened the way for his removal from the post of PACE President.

This was announced by the Chairman of the Ukrainian delegation to PACE Vladimir Aryev in his Facebook.

According to him, this body has no authority to do an audit of the PACE resolutions.

PACE officially initiated the resignation of the controversial Agramunt

“Obviously the goal is different – the further scuffle in the Parliament of Europe, which is favorable to Russia now. The latter even refused to pay contributions to the organization, once again proved that it is not going to fulfill not only the value but also the technical obligations. This fact, incidentally, angered many in the CE”, – Aryev wrote.

Pedro Agramunt filed Arbitrazni the Committee of the Council of Europe on the illegality of the PACE resolution, which opened the way to Usun…

Published by Volodymyr Ariev 4 September 2017
We will remind, the scandal around Agramunt unfolded after reports of his visit to Syria. He acknowledged that made a mistake when I fly a Russian plane. Agramunt said that the Russian lied to him and framed, and that the voluntary resignation he will not leave.

Information about the visit Pedro Agramunt in Syria appeared on March 20. Russia announced this event as the signal that is still present in the PACE, although two were sent to Strasbourg a list of his delegation. And before that the Russian delegation was deprived of voting for the annexation of Crimea, and then, offended, Russia stopped work at PACE, and this year expressed a desire to return.