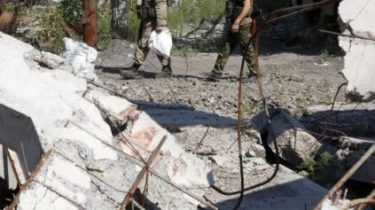 During the day militants in the Donbas 44 times fired Ukrainian strongholds. One Ukrainian soldier was injured.

The most turbulent in the direction of Donetsk. The greatest number of fire provocations recorded near the settlement of Zaytsevy. Since 18 hours terrorists of 5 times fired at the Ukrainian positions from infantry fighting vehicles, rocket-propelled grenades and heavy machine guns. Also at the end of the day under the fire three times, Ukrainian fortifications in the industrial area of Avdiivka and twice near Mayorsk.

In the seaside area of three times the terrorists used small arms in the area of Pavlopol. And about 20 hours near the same village, they released 5 min caliber 82 millimeter. The fire fighters from small arms fixed near Hnutove, Talakovki, Lebedinsky and Shirokino. And as a result of grenade fire on the outskirts of Marinka injuring one Ukrainian defender.

On the Lugansk direction about 21 hours, militants from small arms fired at the checkpoint (entry-exit) village of the Luhansk.

We will remind, the all faith on 25 August along the demarcation line in the Donbass began a trucethat was agreed at the talks “channel four” in connection with the start of the new academic year.