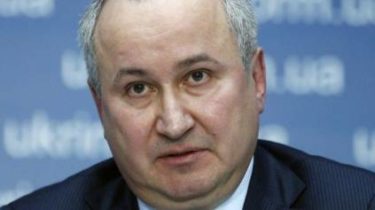 The head of the security Service of Ukraine Vasily Gritsak has accused the head of the Federal security service of Russia Alexander Bortnikov that he was ready to blow up their own citizens on the territory of Russia, to give a pretext for the invasion of Ukraine.

About this Hrytsak said in a broadcast on Ukrainian television. The video message was circulated by the press Secretary of SBU Elena Gitlyanskaya.

“You crossed the red line, you were ready to blow up of its Russian citizens in order to destabilize the situation in Russia and to give reasons for the invasion of the territory of Ukraine, to begin a full-scale campaign,” said Hrytsak in an address to the head of the FSB.

“You are completely aware of what kind of geopolitical consequences might result in these actions? You realize that these things have to answer? You understand that today the current government, including Putin, is not eternal? You know how many curses will get your children? In your power to stop it. Stop!”, – said the head of the SBU.

The FSB announced the arrest of the terrorists ISIS, who were preparing terrorist attacks of September 1

Hrytsak also accused the FSB of organizing terrorist acts on the territory of Ukraine – Odessa, Kharkiv, Kherson. He added that the attacks “dozens of people were killed, many were injured”.

Vasyl Hrytsak assured that you will never give an order to organize a terrorist attack in Russia against civilians.

Earlier hrycak said that the security Service of Ukraine received information about a possible Russian FSB preparing terrorist acts on the territory of Ukraine. He argues that the funneling aggressor on Ukrainian territory their subversive groups. Hrytsak said that only in the last scene of SBU found three subversive groups, who were preparing terrorist attacks in Ukraine.