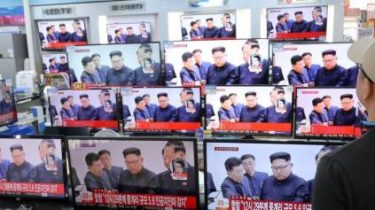 About it reports a press-service of the Ministry of foreign Affairs of Ukraine.

It is noted that this test in combination with an aggressive program of ballistic missile poses a real threat to the security of not only neighboring countries but also the world community.

The global stockpile of nuclear weapons: which country has the highest number of warheads. Infographics

“Ukraine, which voluntarily renounced the third largest nuclear stockpile and strategic delivery vehicles, considers the recent actions of Pyongyang as a conscious, reckless and provocative step. Once again, we have to state with regret that the actions of the North Korean leadership directly and cynically contrary to numerous resolutions of the UN Security Council”, – is spoken in the message.

Videochat, is preparing to launch a new ballistic missile

“Ukraine is ready to join more decisive action by the international community, in particular with the use of leverage in the UN security Council, to counter further nuclear and missile threats. With the aim of strengthening the regime of nonproliferation of nuclear weapons call on the UN security Council to carry out a detailed expert study of the development of North Korea’s nuclear and missile programs in the context of identifying possible foreign aid to Pyongyang in this sphere”, – said the Ukrainian foreign Ministry.

Recall, 3 September it became known that the DPRK had conducted a sixth nuclear test. According to North Korea, it conducted a successful test of a hydrogen bomb. It was reported that tested the hydrogen charge can be placed on an Intercontinental ballistic missile. However, such actions of the DPRK was forced to respond to the international community.

TSN.ia collected the reaction of politicians and international organizations to the test of North Korea.