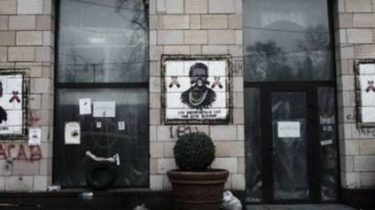 Portraits and quotes of Taras Shevchenko, Lesia Ukrainka and Ivan Franko returns to the front of the house in the street Hrushevskoho in the capital. The readiness to restore the destroyed businessman symbols of the Maidan stated by several Kyiv artists and the author himself, whom we know under the name “Sociopath”, says the story TSN.16:45.

Monday under the protection of private structure owners were taken from the shop of luxury furniture and removed the consequences of the pogromthat made furious Kiev through the destruction of the revolutionary graffiti activists. Pictures adorned the wall from February 2014, the portraits have become one of the trademarks of the revolution of dignity and historical landmark in the capital. But on Saturday they drew people, whose work is closely watched by the store owner of luxury furniture. It subsequently in social networks, called graffiti painting in quotes and offered to look like art on the market.

Now Igor Dotsenko says that he portraits are not touched, and drew graffiti unknown schik. “I was in complete shock. I have been waiting for, already began to take pictures. Some dummy painter. There is a consequence to the Prosecutor’s office opened the case, the police opened a case and the SBU opened a case. I think that three such competent organization will understand who staged this provocation,” says the shop owner.

In the capital blagota TSN said that they did not sketched. Didn’t do it and employees of the Institute of history of NAS of Ukraine, which owns the building. If the police will find the culprit – he will be fined. The author of the drawings is now on an extended vacation in the West, the original stencils and paintings from him. “Sociopath” is not a public person, comments on the camera does not, but in social networks reported that the is ready to resume his drawings. “I promise you all, that will restore the Trilogy as soon as the situation will make the right development,” he said.