In the Parliament called economical postelny carpet for 200 thousand UAH 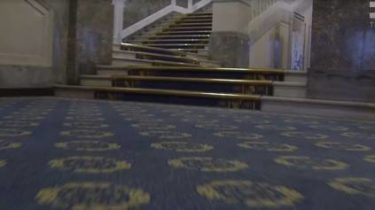 Floors near stairs in the Verkhovna Rada of Ukraine the carpet cost the budget in more than 199 thousand. In Parliament I assure you that this is not much said in the story TSN.19:30.

Annually for the replacement of tracks in the Parliament allocate a certain amount in 2016 to replace the blue carpet has allocated about 481 thousand hryvnia, this year decided to lay carpet, which was bought in 2006. Almost 11 years he lay in the warehouses Happy.

The government approved the draft budget for 2018

As reported, the deputies in the new season stepped on the new carpet. Paving, according to information resource Prozorro, cost the state budget almost UAH 200 thousand. They are springy under parliamentary and sparkle gold boots of the nut. However, the people’s deputies to new things are different. For example, the people’s Deputy from BPP Alexey Goncharenko under his feet was not looking, and change is felt. And the Deputy group of the people’s Will, Volodymyr Lytvyn said, could save on the carpets when the country needs to reduce spending.