Lavrynovych suspect in a coup on 1 September, and his “lawyer” says that the agenda was not 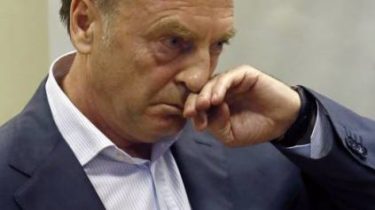 Former Minister of justice Oleksandr Lavrynovych is a suspect in the case of the seizure of power through illegal refund of the Constitution, 1996, to September 1, 2017.

This was announced by the head of Department of the procedural management of Prosecutor General’s office Alexey Donskoy at the briefing, reports Ukrainian Pravda.

According to him, the notice was provided within the framework of existing legislation.

“He had some calls to telephones, in particular mobile phone when he personally announced that he is a suspect. It was proposed to 17 hours appear to have been implemented procedure. He said that is in the mountains and arrive can not” – said Donskoy.

After that, the notice was sent by the actual address of residence of the former Minister.

“We said, whether the address of registration specified in the case file, the address at which to send a notification or may want to duplicate in other locations. He said that enough to send in his place of residence”, – said the Prosecutor.

Videomagazine case: GPU reported Yanukovych and Lavrynovych on suspicion in capture of the power

“Therefore, he is considered a suspect since September 1 this year,” added don.

At the same time, Eugene sweet, who called himself a lawyer of Lavrynovych wrote in the social network that the suspected ex-Minister is not presented, also the suspect allegedly did not received the agenda on interrogation.

Regarding the alleged new suspect Oleksandr Lavrynovych: as his attorney, I declare that as at 13-23 todays most…

The Prosecutor of Donskoy at the briefing noted that sweet is not a lawyer of Lavrynovych.

“In order to become a lawyer someone, he must first enter into a contract with the suspect and provide these documents to the bodies of preliminary investigation, that is, to reassert its authority of defender. Today it is not done,” he explained.

Also added don, Lavrynovych was summoned to the GPU in for questioning on 7 September, he was waiting there at 14.00.

Ex-Minister, according to the Prosecutor, interrogated before the presentation of suspicious pre-trial investigation.

“Today, there are three defendants who are notified of suspicions. But this is not the limit, we are still working,” he warned.

On 6 September, the Prosecutor General Yuri Lutsenko said that PGO is investigating the case of the constitutional revolution of 2010, which led to the seizure of state power by extending presidential powers in Ukraine at the time, Viktor Yanukovych. In fact, it is reported about suspicion to the former President Viktor Yanukovych and ex-Minister of justice Oleksandr Lavrynovych.