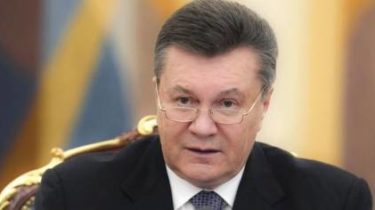 Switzerland requires evidence for the transfer of Ukraine’s gold stolen and taken out of the Ukraine and surrounded by the ex-President of Ukraine Viktor Yanukovych.

About this TSN reported in the Federal Department of foreign Affairs of Switzerland.

“Today the Ukrainian assets, which are valued at around 70 million Swiss francs frozen in Switzerland. The assessment amount may be changed depending on the number of criteria, such as currency fluctuations, the cost of equity, and the removal of persons subject to freezing, partial release of frozen assets, and so on. The return of the frozen assets of the Ukrainian authorities may occur only after their illegal origin will be set by the court. However, until a final judicial decision on the confiscation of these assets not issued by the Ukrainian judicial authorities”, – reported in Department.

Federal Department of foreign Affairs of Switzerland did not provide information about the exact amount of frozen assets.

It is noted that the Ukrainian government has filed several requests for mutual legal assistance, Switzerland. The Department stated. the General Prosecutor of Ukraine can count on the assistance provided by the International center for asset recovery, which is funded by Switzerland, Liechtenstein and the UK.

“While these requests for mutual legal assistance has already led to significant interim conclusions, more time is required to complete a current criminal proceedings,” – said in Switzerland.

We will remind, the Swiss Prosecutor’s office commented on the TSN information about the arrested “gold Yanukovych”.

“The Federal Prosecutor’s office, as a responsible law enforcement authority in Switzerland, has information about this case. However, on the basis of official secrets and investigations, Federal prosecutors can’t comment on any ongoing criminal proceedings. As always, to all those involved apply the presumption of innocence,” – said in response to the request.