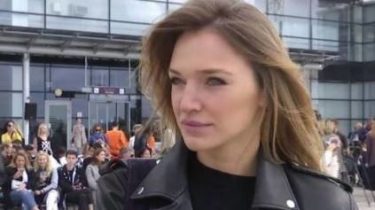 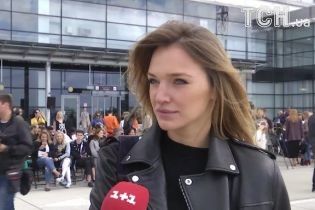 The daughter of MP from the Opposition bloc Mikhail Dobkin, Alla, recently married for Oleg Gurevich, still not had a honeymoon.

She told about it to the correspondent of TSN during the show, Jean Gritsfeldt within Ukrainian Fashion Week.

“The honeymoon has not been, to me, a lot of people asks about it. Probably after the New year! While a very busy schedule and my husband and I have. Don’t have time”, – said the girl.

The ramp and Botanical gardens: the designers chose an unusual location for the Ukrainian Fashion Week

In this case, the location of its new year holiday 24-year-old Alla doesn’t know yet, assuming it will be a surprise for her.

The politician’s daughter loves to sing karaoke: movies this hobby it often shares in the social network.

Alla explained that in his childhood, studied music, and this she liked.

“I even have the album, there are children’s songs about grandma, about mom. Sometimes we’re going home and they listen. Thinking of becoming a singer, but this is more than a dream. While I sing for the karaoke. Plan after the New year to do the vocals,” she said.

According to the girl, her father loves to sing.

“Daddy likes, yeah, and grandma. We have all sing – a creative family. Of course, the “Glass of vodka on the table” we are not sounds, but these more classic songs are present,” – said Dobkin about the musical tastes in his family.

Recall the wedding photo of Alla Dobkins caused a sensation in the Network because of its frankness. The sexiest scenes were with friends in their underwear.