Calls, military threat and the call to launch land reform: what Poroshenko said in an address to BP 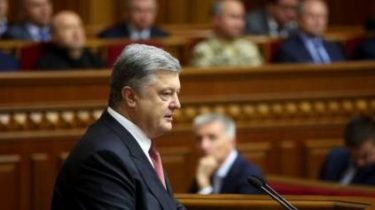 The head of state spoke about the internal and external situation of Ukraine.

TSN.ia collected the main theses of the speech Poroshenko.

“They are the pride of the entire Ukrainian people,” Poroshenko awarded 67 military

In particular, during his annual address in the Parliament the President recalled the economic growth bezviz and spoke about the “predatory Horde”. Poroshenko said that Ukraine has emerged from the deep, deadly economic and political precipice, but over it hangs the “evil Horde”.

In addition, Poroshenko told about the challenges now facing Ukraine. One of them is that Ukraine has only one year left to actively work on reforms. The President also noted that in the country there is resistance to change: “the farther a country moves along the road of change, the greater the resistance of various interest groups, resourceinspector minorities in the form of a corrupt bureaucracy and weakened, but still quite strong oligarchy, a very large number dependent on this group of people”.

Videoinputname the President’s message. Poroshenko said in the Parliament on the European Integration and the Russian threat

Third, one of the most dangerous challenges, according to Poroshenko, is populism, which is particularly dangerous sizes purchased in the past and the beginning of this year.

In addition, Poroshenko said that under the strategic command and staff exercises does not exclude the creation of a new strike groups of Russian troops for the invasion of the territory of Ukraine.”Seven thousand platforms with soldiers and equipment have reached, or are approaching our borders. No guarantee that the completion of the maneuvers, it all comes back home from Belarus to Russia, we do not have”, – said the head of state. He added that evidence concerning the preparation of the Russian Federation before the war on a continental scale is becoming more.

Poroshenko stressed that the Russian network remain instruments of the Russian security services, so their number in Ukraine will be reduced in the future.

According to the Ukrainian leader, is now the most sensitive and complex issue in our country – corruption. Poroshenko said that none of the officials did not shy away from responsibility, if he is rightly accused of corruption.

Also, according to Poroshenko, the urgent issue is the creation of a special anti-corruption court. According to the head of state, this body should be dependent only on law, but free from any outside influences: “My and your, dear people’s deputies, political parties and progressive society”.

Poroshenko also said that does not rule out holding a referendum on membership of Ukraine in NATO, to demonstrate the will of the Ukrainian people. According to the head of state, the Ukraine without the formal approval of the action Plan on membership in NATO is doing it unilaterally. “Together with the North Atlantic partners have been jointly developing the Ukrainian army to NATO standards, which it basically needs to reach the end of 2020,” – said the President.

The head of state addressed the Parliament with certain suggestions and appeals.

So, Poroshenko called on Verkhovna Rada to abolish parliamentary immunity with the introduction of the decision into force from 1 January 2020: “to facilitate the adoption of this decision, ensure that you do not feel that it is somehow directed at you, I have a very simple proposal: let’s accept this decision with its introduction with effect from 1 January 2020 for the election of the new Verkhovna Rada”.

The President hopes that the Verkhovna Rada next week to adopt a law on pension reform. “I hope that next week the Verkhovna Rada will take our joint project of pension reform, which was developed by the government, as approved and modified by the National Council of reforms under the President of Ukraine, and has a major contribution was made by you,” – said Poroshenko.

The President also urged MPs in the coming weeks or even days to give him proposals for candidates for the positions of members of the Central election Commission.

One of the appeals of the President was the petition to the Council when approving the state budget of Ukraine for 2018 do not cancel the simplified tax system for small businesses. In addition, according to Poroshenko, the financial investigations Service should not pursue the individual entrepreneurs and will be under parliamentary control.

In turn, Poroshenko announced in the near future to report on and discuss the law on the reintegration of Donbass: “In the near future it will be made public and tabled in Ukraine and among our partners. The final word will be yours, dear deputies”.

Poroshenko also urged the Verkhovna Rada to adopt the necessary laws that will remove the phobia about land reform will take into account all the warnings and create the necessary fuses to start in the future of land reform. “I’m not going to squeeze out of Parliament a land reform, but please accept, at least verbally, mentally, in the heart of the political decision in its favor. To make such laws that will remove phobias that exist on this topic in society and among deputies, laws that will take into account all the warnings and put all the fuses, set the minimum price, protects the farmer will make a transparent system in the registry to register, but will give the freedom of the Ukrainian peasant”, – said Poroshenko, adding that an open land market – is one way to quickly draw in Ukraine a major investment, but Parliament itself should determine the start date of this reform.