Errors need to be corrected. Poroshenko urged the Parliament to cancel the Declaration of public activists 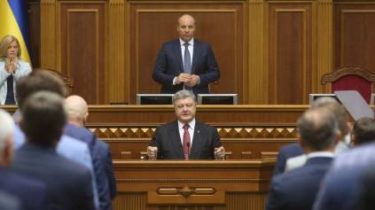 The introduction of electronic Declaration for community activists was a mistake. About this during his address to the Parliament on 7 September was declared by the President of Ukraine Petro Poroshenko.

The guarantor stated that in July introduced in Parliament a bill to repeal the relevant decision and urged the deputies to support it.

Groisman told, will put Ukraine’s Declaration of income for all citizens

“So it did not look like a good President, and the deputies not really, I’m willing to admit that the introduction of the Declaration for this group was our common mistake, but mistakes must be corrected”, – said Poroshenko.

As previously reported, on March 27, President Petro Poroshenko signed the controversial amendments to the law on e-Declaration. In connection with the new revisions, some categories of military personnel are exempt from the requirement to provide statements about income, but to file e-Declaration required all representatives of public organizations.