In Luhansk region, the children found the grenade right on the railroad tracks 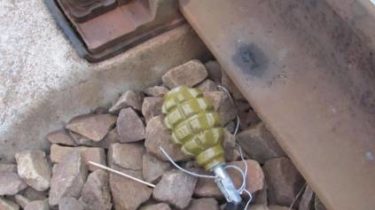 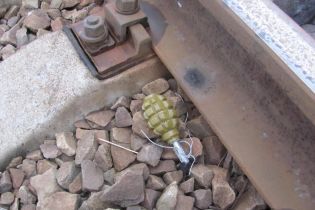 Wednesday, September 6, in the Luhansk region near the railway track, two teenagers found a grenade.

It is reported by the Department of communication of the police of the Luhansk region.

Children reported about a dangerous find the man, who was walking on the railway pedestrian perehodom home from work, so he immediately called the police.

During inspection of the scene, police found a grenade f-1 with a large bomber, which was lying near the railway track in Sochi.

At the time the investigation was suspended the movement of trains in the direction of “Nasvetevich-Rubizhne”.

The grenade was seized for further directions on explosion-technical examination.

Currently, the criminal proceedings are opened, all materials which will be sent for further investigation in the SBU.

The Dnipropetrovsk teenager on a Bicycle was blown up by a grenade, brought from zone ATO

Recall that in Ivano-Frankivsk on the front of the Center of Polish culture found the grenade. The finding reported by the employee of this institution. In her words, a grenade was discovered during routine cleaning of the air conditioning system. The explosive device was a metal drainpipe between the first and second floor of the house.

The withdrawn subject similar to a grenade RGD 5 with a fuse, was sent for expert research.