Poroshenko made the holding of a referendum on membership in NATO 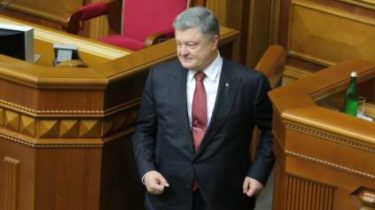 The President of Ukraine Petro Poroshenko during the appeal to the Verkhovna Rada on 7 September said that does not preclude the holding of a referendum on membership of Ukraine in NATO, to demonstrate the will of the Ukrainian people.

According to the Ukrainian leader, our government is now unilaterally performs the items of the action plan on membership in the Alliance.

“Without the formal approval of the plan of action concerning membership, we, nevertheless, do it unilaterally”, – quotes “Interfax-Ukraine” his quote.

He also added that, together with partners from NATO, Ukraine is developing its army in accordance with the standards of the Alliance, “which it mainly must achieve by the end of 2020.”

Poroshenko expressed confidence that the army will become the first state institution that will meet the criteria of NATO membership.

The guarantor has expressed the view that public opinion polls show that most Ukrainians support Ukraine’s accession to the European Union and joining NATO.

“I do not exclude that initiate in due time the referendum to show the will of the Ukrainian people. All: and our friends, and aggressive neighbor, and all Ukrainian politicians… To any political scenario none of them wanted to audit the course and turn around”, he added.

We will remind, earlier the President Petro Poroshenko assured that Ukraine will become a member state of the European Union and NATO.

“Consistently working, we will bring those days, when in the future Ukraine will become a member of EU and NATO member”, – he stressed.