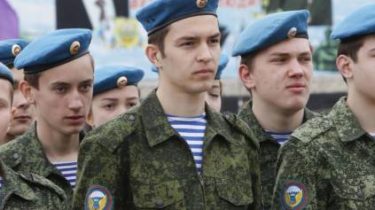 The President of Ukraine Petro Poroshenko said that under the strategic command and staff exercises does not exclude the creation of a new strike groups of Russian troops to invade Ukraine.

He said this on 7 September during his address to the Verkhovna Rada.

“Seven thousand platforms with soldiers and equipment have reached, or are approaching our borders. No guarantee that upon completion of the maneuvers is coming back from Russia, home to Russia we have,” – said Poroshenko.

According to Poroshenko, that is why Ukraine has strengthened control on all sections of the state border.

“The sending to Ukraine subversive groups, preparation of terrorist acts. This is not a complete instrumentation of the Kremlin that we have to effectively fight. But the main threat from Russia is still military. There is no indication that Moscow is prepared to retreat from Donbass or to withdraw from Crimea. Evidence of its preparation for offensive action on a continental scale, unfortunately, more. As for the Russian-Belarusian exercises “West-2017”, though, in my opinion, they should be called “the Elder,” he said.

During the annual address to Parliament, Poroshenko said the economic growth bezviz and “predatory Horde”

Poroshenko recalled that in 2014, allegedly under the guise of ensuring security at the Olympics in Sochi, Russia has deployed forces to conduct a special operation to capture the Crimea. “In the second half of 2008 was the exercises “Caucasus-2008″ and then the Russian troops were involved in the maneuvers instead of polygons to return to places of permanent deployment the attack on Georgia. By the way, September 2, marks 9 years since your predecessors in this hall to find an absolute political short-sightedness, irresponsibility, failed the resolution on the recognition of Russia as a country that has carried out military aggression against sovereign, independent Georgia,” – said Poroshenko.

The President noted that now the direction of train movement transporting troops of the “Russian Railways” is transferred to the control of the military posts of the Department of transport security of the Russian Ministry of defense. The President believes that the Kremlin tests how ready for a major war with the West is not only the Russian armed forces, but also all Russian state.

We will remind, soon, on the territory of Russia and Belarus will start exercises “West-2017”. They will last from 14 to 20 September. Russia has said that participation in training will take 13 thousand military, but in the West, these calculations do not trust, believing that it will participate in about 100 thousand. Also NATO is concerned that these teachings are not transparent, they do not pass from the media.