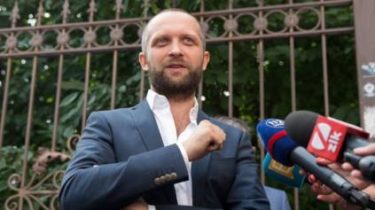 In particular, the judge Vladlen Lazarenko partially granted the request of prosecutors Specialized anti-corruption Prosecutor’s office, counted the last Deposit of the state income Polyakov and the appointment of a new $ 608 thousand UAH.

The poles must pay a Deposit within 5 days.

This court ruling is not appealable.

In addition, the judge reminded that the Poles should surrender the diplomatic passport and other documents, which entitle to entry and exit from Ukraine.

In turn, the SAP prosecutors asked the court to recover from Polyakov Deposit in the amount of UAH 5 million.

July 21, Solomensky regional court of Kiev chose a measure of restraint to the Deputy Polyakov – 304 thousand bail and ordered to wear an electronic bracelet. Also the Poles should surrender passport and not to leave Kiev and Uman without coordination with the investigation. July 25 Poles made bail in 304 thousand. August 23, after several failures , he finally wore an electronic bracelet.