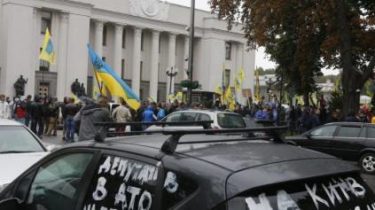 Owners of cars with foreign registration spent the night in the government quarter just in cars. About a hundred cars lined up tightly under the fence of the Verkhovna Rada, so the traffic on the street Grushevskogo free.

This is reported by the journalist Inna Bodnar, says the plot of TSN.Ranok.

Motorists say that in the government quarter in vehicles spent the night around a thousand protesters and activists. Before that they stocked and blankets, and food. Say they will stay in Parliament as long as they do not hear.

“Parliament may adopt a bill that would suit our NGO,” says another motorist.

You will reach the hands of MPs to this bill is unknown. Because the Parliament today is quite busy day. And it starts with the annual address of the President of Petro Poroshenko.

Also, the deputies should proceed to the consideration of bills on health reform.