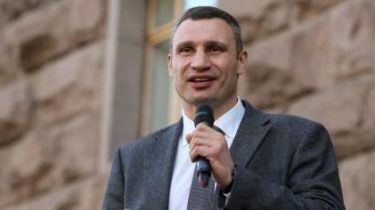 The mayor of the capital Vitali Klitschko with academics and business people looking for opportunities to hold smart young people in Ukraine. Talented scientists were not gone abroad, Ukrainian politicians and the German Fund were the third scientific conference, which will select the best scientific projects, according to a story TSN.19:30.

In the first stage, the organizers accept applications, then held the contest, the winners receive funding for their development. Last year travel project was awarded a 500 thousand dollar investment. Who will win this year – no one can predict.

Klitschko claims that the subject of science he was close, too kandidatskuyu he defended his thesis at the Institute of physical education on the topic of determining the abilities of the boxers at different stages of selection. The mayor admitted that he would like to aim at a doctoral degree. “When I continue in this direction, their work, and it will help to give a clear answer, what is talent and ability”, said the mayor of Kiev.

Klitschko hopes that the VR will help to solve traffic problems

The mayor spoke to the young talents remained in Ukraine, but their children are taught abroad. In the summer my oldest son Egor for a while they came to my father, and he gave a walk through the city – so long studied in the United States, Germany and the UK that he could not answer the question in the Ukrainian language. Despite this, the father believes that the son can return to Ukraine. “They can learn anywhere they have to get a good education, but they must know where they are, to love their country and work in their Homeland,” – said Klitschko.