Injured in the explosion was a famous model Dior – volunteer 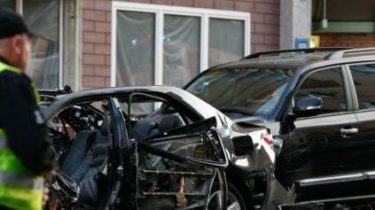 Injured during an explosion in downtown Kiev , the woman was a famous model who took part in the companies Dior.

This was reported by the friend of the injured volunteer Ksenia Lazebnik, who came to visit her in the hospital. The victim’s name is Natalia, but her last name the woman reveals, speaks, does not know what now she can wear.

In the hospital she denied the information that the woman lost his leg. She has a torn left heel, broken hip, injured right hand. Now the woman’s leg trying to save the doctors, information about the amputation has not been confirmed. Also, she was badly damaged face.

The baby’s fine, it only burns the first stage. Now he was transferred to the Department of burns. According to an acquaintance of the victim, the child – 6-year-old boy named Anton, son of the victim, although earlier it was reported that during the explosion injured 10-year-old girl.

Why was the woman in the car familiar can not answer. Not says and what connection she had with the deceased Timur Makhauri.

“I don’t know anything, and nobody knows except for her,” says Ksenia.

According to her, Natalia was also a Toyota, but exploded whether it was he, really can not say.

Also as a result of the incident injured the woman and child. For the life of the first of these fighting doctors, she is in Kyiv hospital No. 17. The child was hospitalized in the “Hospital”. His life now threatens nothing.