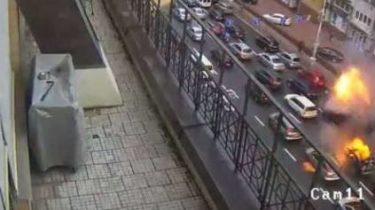 In the Network appeared another video that captures the explosion of a car in Central Kievthat killed a man and seriously injured a woman.

The video recorded footage of the movement of cars in a small tube. The 48 second video shows how “Toyota Camry” ostanavlivaetsa, and then explodes. At this time, from the neighboring cars start to run out people. The machine that exploded, continues to roll down the street propping up the car, going ahead.

On the balcony of the house facing the people to the place of tragedy also start meeting people who are trying to get out of the mangled car three people who were in it.

On the evening of 8 September in the center of Kiev near Bessarabian market , an explosion occurred in a car Toyota Camry with Georgian license plates. In the car were three people. As a result of the incident killed a man. The police found that he was a citizen of Georgia Temur Makhauri. Security forces link him with the Chechen community. In 2017, he was detained in Kiev for illegal storage of the weapon, but the man was freed in a plea deal. Makhauri is called “personal enemy” leader of Chechnya, Ramzan Kadyrov.

Also as a result of the incident injured the woman and child. For the life of the first of these fighting doctors, she is in Kyiv hospital No. 17. The child was hospitalized in the “Hospital”. His life now threatens nothing.

All about the explosion in Kiev: the death of a suspect in the killing of Basayev, killed famous model

In Kiev introduced a stronger version of service: policing and patrolling of the city will involve all divisions of the Metropolitan police.