All about the explosion in Kiev: the death of a suspect in the killing of Basayev, killed famous model 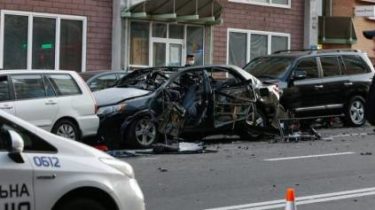 On Friday, September 8, in the center of Kiev explosion. On the street Skoropadska, near the Bessarabian market exploded the car “Toyota Camry” in Georgian rooms. The explosion occurred at 18:08 and this moment caught on video of one of the cars that were there.

In “Toyota” at the time of the explosion was three people – man, woman, and child. Man killed, woman in critical condition was taken to the hospital for her life now fighting the doctors. Baby also hospitalized, but his life is not in danger.

Video settings in Kiev, near the Bessarabian market while driving the car exploded

Service in the ATO, a suspect in the murder of Chechens who Timur Makhauri

The deceased was a citizen of Georgia Temur Makhauri, who had strong ties with the Chechen community. According to the representative of the Ministry of internal Affairs of Ukraine Artem Shevchenko, Makhauri was also known in criminal circles.

Makhauri had problems with the law in Ukraine. This year he was detained on Bessarabka for illegal possession of weapons, but he made a deal with the investigation, pleaded guilty and received a suspended sentence of five years. He was driving a Mercedes with Georgian license plates, was stopped by a patrol. In the car were armed men, and he Makhauri showed the certificate of the scout Chechen battalion, which is stationed in the sector “Mariupol”. At the front, then confirmed that he serves in the area of the ATO.

Comrade of the deceased at the scene told reporters that Makhauri was a volunteer Chechen International peacekeeping battalion named Dzhokhar Dudayev. According to fellow deceased, Makhauri was a personal enemy of the leader of Chechnya, Ramzan Kadyrov , and his life was repeatedly attempted. In the opinion of men, the murder is “Russian trace”.

Three years ago, Timur was detained by Turkish authorities on suspicion of the murder of five Chechens who disappeared in the country from the Russian justice. Turkish authorities and the press then blamed Makhauri in the Kremlin, and Turkish media, citing the Prosecutor Ahmet Demirayak reported that Makhauri is most directly involved in the elimination of the leader of Chechen militants Shamil Basayev.

The Istanbul Prosecutor’s office has demanded that Makhauri life sentence for the murder of Chechens. Two of them, Rustam Altemirov and Zaurbek Amriev, the TFR was wanted on suspicion of involvement in the terrorist attack at Domodedovo airport, and the third Ali Osaev – was a representative of Doku Umarov in Turkey.

Makhauri denied his guilt and even came to the funeral of his victims and expressed condolences to the relatives, claiming that he himself is a relative of the victim.

Videosto about the fatality in the capital of Timur Makhauri

Timur is also well known in Georgia as a participant in the events in Lopota gorge in September 2012, the Georgian special forces destroyed a group of militants who were trying to move to Dagestan. It was then supported by the then Deputy interior Minister Giorgi Lortkipanidze (and former head of the Odessa police), who said that Makhauri is not a terrorist and not an agent of the FSB, and “a patriot of Georgia”.

Close friends of Timur, who were with him in the anti-terrorist operation, told TSN that he was a close friend of the former President of Georgia Mikheil Saakashvili. But on the question of the journalist, could this event be a warning for politicians not to return to Ukraine, the source said, “Not think.”

The injured woman was a famous model

Injured during the explosion in the center of Kiev, the woman was a famous model who has participated in companies such as Dior, said her friend Lazebnik. The victim’s name is Natalia, but her name the woman did not disclose, because, he says, does not know what now she can wear.

In a car explosion in downtown Kiev, woman severed leg

The police said that the explosion at Natalya’s leg was torn off, but Xenia the hospital denied it. The victim is a torn left heel, broken hip, injured right hand. Now the woman’s leg trying to save the doctors, information about the amputation has not been confirmed. Also, she was badly damaged face.

The baby’s fine, it only burns the first stage. Now he was transferred to the burn unit. According to an acquaintance of the victim, the child – 6-year-old boy named Anton, son of the victim, although previously there was information that during the explosion injured 10-year-old girl.

“The threat to life is clear”. Doctors have described the condition of the victim during explosion in Kiev