Women’s courage: a young girl chef returned to the plant, where he lost a leg 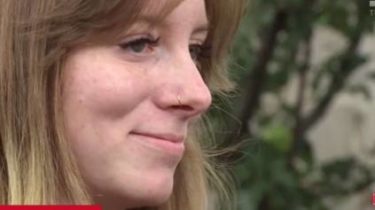 25-year-old Olga Tarasevich back in Avdeevka. About the fragile girl-cook, who during an enemy attack he received a severe wound, but did not lose faith in life, talking at the front, says the story TSN.19:30.

Now Olga laughs and calls himself “the terminator” because it has a metal prosthetic leg. But four months ago she was in the hospital with no definite prospects for the future. In Avdiivka, the girl managed to last for six months, where she met Alexis, who was then caring for her in hospital. “Fed with a spoon, comb,” – says Olga.

Видео25-year-old girl who lost a leg in the Donbass, returned in Avdeevka

To go in the house, where a missile hit, she did not dare. After the fire the building was lost living conditions, the girl survived miraculously. The chance to save the leg was not – the fragments severed the tendon. “I screamed, then fell across the bed I got – and lost consciousness. Dragged into the cellar, got a tourniquet on it,” she recalls. In the hospital the girl was sure that his foot fell asleep. “I ask myself: numb, feel, expand, correct. Say: there is nothing to fix,” admits hurt.

First, she moved in a wheelchair, then on a prosthesis. How the girl bravely accepted the reality, impressed everyone in the hospital – she went to the gym, started to train and dance. She was forced to do as strong men. “Because they’re like, Oh, I’m tired! And doctors say and Ollie doesn’t hurt, it girl, a month – and already jumping,” said Tarasevich.