The arrival of Saakashvili, the politician after the conference in Przemysl going to Krakovets on the car with journalists 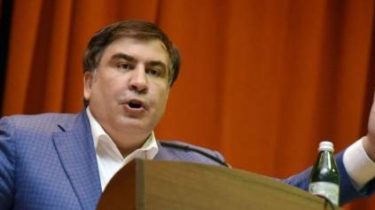 From Warsaw went the bus with journalists of leading media, which will cover the return Mikheil Saakashvili to Ukraine.

The politician plans to go to the checkpoint “Krakovets” with them. About it reports “Ukrainian truth”.

The bus carrying the journalists in Przemysl, where in the morning, Saakashvili has to give a press conference.

In addition to Ukrainian media, there are also foreign – BBC-Ukraine, AP, AFP, Frankfurter also was the journalists of the Georgian TV channel Rustavi. In General up to 10 people. Some journalists waiting for Saakashvili in Przemysl.

According to the officer, the politician will join the journalists, and this bus will cross the border on a common basis.

Incidentally,about three o’clock in the morning September 10, Saakashvili on his page in Facebook reported that is already in the Polish city Rasave (Rzeszow, or Reseve).

Recall that in anticipation of the arrival in Ukraine, ex-Chairman of the Odessa regional state administration and the former President of Georgia Mikheil Saakashvili, who was deprived of citizenship of Ukraine, at the checkpoint across the border “Krakovets” brought together hundreds of activists. The politician announced that will cross the Polish-Ukrainian border on Sunday, September 10.

Some of them had marched from Kiev. Law enforcement officers detained a convoy at night on 9 September on the territory of Kyiv region. “The Headquarters of the blockade” reported that the gunners were not allowed to get out of a car, allegedly illegally demanded to conduct a search of cars and people. Court orders the special forces was not, as noted by the activists. On the morning of 9 September, police in the Zhytomyr region for the second time detained a convoy, which is sent to the Krakovets ‘ to meet the ex-head of the Odessa regional state administration of Mikheil Saakashvili.